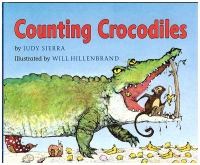 Counting Crocodiles
by Sierra, Judy; Hillenbrand, Will (Illustrator)
Rate this title:
vote data
Click an element below to view details:

Judy Sierra holds a Ph.D. in folklore from UCLA. She is the author of many esteemed children's books, including Nursery Tales Around the World, winner of the Aesop Prize from the American Folklore Society, and Good Night, Dinosaurs. She is also the reteller/compiler of several books of folklore for teachers and storytellers. Ms. Sierra lives in Northern California. WILL HILLENBRAND has written and illustrated many award-winning picture books, including The House That Drac Built by Judy Sierra and his own Down by the Station. He lives in Terrace Park, Ohio.