All because you matter / written by Tami Charles ; illustrated by Caldecott Honor winner Bryan Collier. 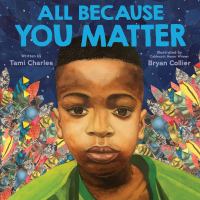 All Because You Matter
by Charles, Tami; Collier, Bryan (Illustrator)
Rate this title:
vote data
Click an element below to view details:

All Because You Matter

BRYAN COLLIER loves to paint. He has successfully channeled his creative energy and love of art into an illustrious career as a children's book illustrator and writer. He began painting at the age of 15 and eventually landed a scholarship to attend Pratt Institute in New York. He has won four Caldecott Honors for Rosa by Nikki Giovanni, Martin's Big Words by Doreen Rappaport, Trombone Shorty by Troy Andrews, and Dave the Potter by Laban Carack Hill. His first book, Uptown , won the Coretta Scott King Award and the Ezra Jack Keats Award. He has won five more Coretta Scott King Awards and three Coretta Scott King Honors. Tami Charles is the New York Times bestselling author of numerous books for young readers, including the picture book All Because You Matter (illustrated by Bryan Collier) and the novels Like Vanessa and Becoming Beatriz . In her teens and early twenties, Tami enjoyed a taste of fame as a member of an all-girl R&B trio. They performed for Boyz II Men, BET, and Showtime at the Apollo , and had a one-hit wonder on the radio. After college, Tami worked as an educator for thirteen years before pursuing her childhood dream of becoming an author. For more information on Tami and Muted , visit tamiwrites.com and mutedbook.tumblr.com.