When Aidan became a brother / by Kyle Lukoff ; illustrated by Kaylani Juanita. 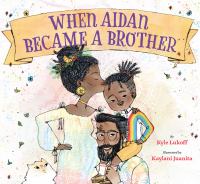 When Aidan Became a Brother
by Lukoff, Kyle; Juanita, Kaylani (Illustrator)
Rate this title:
vote data
Click an element below to view details:

When Aidan Became a Brother

KYLE LUKOFF is the author of A Storytelling of Ravens , which Kirkus Reviews called "not to be missed" in a starred review. After a decade as a bookseller, he now works as a school librarian and book reviewer in New York City. You can find his book recommendations, notes on trans life, and praise from Rachel Maddow online at kylelukoff.com and on Twitter as @shekels_library. KAYLANI JUANITA describes her mission as an artist as "supporting the stories of the underrepresented, and creating new ways for people to imagine themselves." Her work has appeared at the Society of Illustrators and on the BBC website, as well as in her first picture book, Ta-Da! , written by Kathy Ellen Davis. She lives in the San Francisco Bay Area. Look for her online at kaylanijuanita.com and @kaylanijuanita on Twitter and Instagram.